The Impact of Brazil’s Virtual Herbarium in e-Science

A herbarium can be defined as a collection of preserved samples of plants and fungi and associated data. In a herbarium, specimens (samples) of plants and fungi collected in the field are normally dried and mounted on sheets of paper and labelled with essential data, including who collected the sample, when and where it was collected, what was collected (the scientific name of the plant or fungi) and who identified the sample. The identification of the sample can be informed as part of the field data or can be determined later by experts. As taxonomy evolves with time, scientific names, and sometimes even municipalities and country names must be updated. A dynamic curation of specimens and associated data must be in place.

Herbaria exist since 1635, with the establishment of the Museum National d’Histoire Naturelle in Paris, France, but the first herbaria in Brazil were established in the early 19th century. It is important to compare Brazil’s largest herbaria with those in Europe and USA. The largest herbaria in the world, such as Muséum National d’Histoire Naturelle and New York Botanical Garden (NY), hold about 8 million specimens, while Brazil’s two largest herbaria, Botanical Garden of Rio de Janeiro and our National Museum only hold about 600 thousand specimens each. However, Brazil has about 200 active herbaria that together hold about 8 million specimens. Integrating the data of Brazilian herbaria through a network, enabled by the development of information and communication technology, made it possible for Brazil to have an on-line herbarium with significant holdings, comparable to large herbaria worldwide.

This e-infrastructure is enabling the consolidation of a collaborative network of experts totally engaged in improving the quality of the holdings and of on-line data. This network also is involved with 95% of the botany related graduate courses of the country, influencing research and education of future botanists.

The network integrates 193 datasets from 130 Brazilian herbaria and 20 herbaria from Europe and the USA, with holdings of samples collected in Brazil. 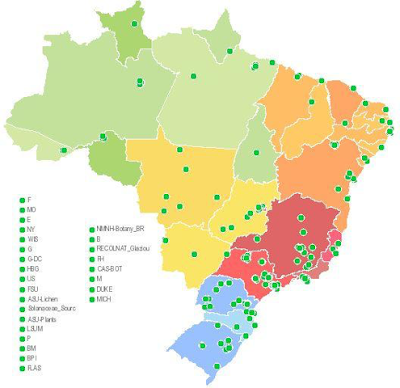 Within the context of the Open and Collaborative Science in Development Network (OCSDNet), Brazil’s Virtual Herbarium sought to understand the impact of data sharing and open collaboration for both data providers and users. For this purpose, the following activities were carried out: